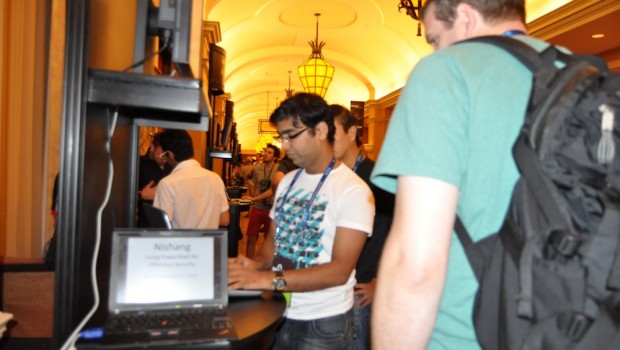 Kautilya is a toolkit and framework which allows usage of USB Human Interface Devices in Penetration Tests. The toolkit contains useful payloads and modules which could be used at different stages of a Penetration Test. Kautilya is tested with Teensy++ device but could be used with most of the HIDs. It has been successfully tested for breaking into Windows 7, Ubuntu11 and Mac OS X Lion. Nishang is a framework and collection of scripts and payloads which enables usage of PowerShell for offensive security and post exploitation. The scripts are written on the basis of requirement by the author during real Penetration Tests. It contains many interesting scripts like download and execute, keylogger, password hash dumper, time based payload and much more. Always a great pleasure to Meet my friend, the gifted Pentester & Hacker, Nikhil Mittal. Nikhil is a renowned security expert and you can expect him everywhere. He is probably the indian who travels more often than India’s President himself :). In fact, Nikhil gave talks/trainings at Clubhack’10, Hackfest’11, Clubhack’11, Black Hat Abu Dhabi’11, Troopers’12, PHDays’12, GrrCon’12, Black Hat Europe’12 and Black Hat Vegas 2012
Funny Fact : Behind you can spot Bruce Schneier. Just minutes before the show, he kept asking me about what Arsenal was ? Then he asked about WiFi Blackhat Key. I told him: Do you really want to connect, it’s not really safe ? He said: nothing is safe in life but sometimes one’s has to take chances !!